Anyone with an interest in Mormon History should order a copy of the long-awaited Massacre at Mountain Meadows (Oxford University Press, release imminent). Written by a team of scholars (Ronald Walker, Richard Turley, and Glen Leonard) employed by the Church of Jesus Christ of Latter-day Saints and many years in the works, the book's release is of both contemporary and historiographic importance. 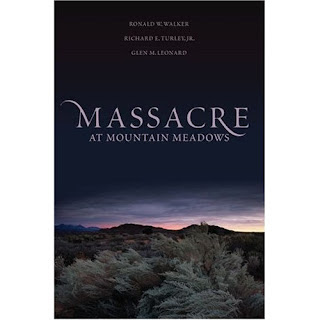 Massacre at Mountain Meadows chronicles in minute detail the horrifying murder of roughly 120 pioneers in southwest Utah on September 11, 1857. Since soon after the massacre, rumors have persisted about the culpability of the church hierarchy -- namely president Brigham Young -- in both ordering and covering up the massacre. Will Bagley's 2002 Blood of the Prophets argued for Young's responsibility on both counts. Having read an advance review copy of Massacre at Mountain Meadows from Oxford, I am persuaded that the massacre was, as the authors portray, a local affair. The details are far too complex to present here, and I lack the expertise to fully assess the relevant sources. Massacre at Mountain Meadows does not chronicle the long investigation into the massacre, perhaps leaving that story for a second volume. I recommend that those interested in assessing the question for themselves read both MMM and Blood of the Prophets.

The publication of MMM is a major event for contemporary Mormonism and has already attracted considerable attention in Salt Lake newspapers and the Mormon "bloggernacle." For a taste of just how controversial the topic remains, look at this detailed review and 182 (and counting) comments on one of my favorite websites, By Common Consent. The comments include some of the brightest stars in Mormon history, including Bill MacKinnon, Will Bagley, and Ardis Parshall (no offense to anyone left out). The review by Jonathan Stapley and Brad Kramer is of first-rate quality.
Email Post
Labels: Mormons religious geography turner's posts

Anonymous said…
Since no one else has posted, I will.

I have to admit (to my dismay and embarrassment) that I have a mental block in this area. I know it is important to always be open to new interpretations...but it is difficult.

Hector Diego said…
I am interested in the history of how the LDS has psychologically managed the legacy of Mountain Meadows, both as an official institution and as a faith community.

I have met LDS missionary youth who claim to have never heard of Mountain Meadows. Should I believe them?

Is there any literature on post-Mountain Meadows LDS, an overview of the aftermath?
July 12, 2008 at 9:50 PM

Anonymous said…
I would assume that if an LDS member did not know anything about the incident, it would be a personal lack of investigation rather than a "cover-up."

I say this because Ensign, an LDS magazine, featured a Mountain Meadows Massacre article in their Sept. 2007 issue. In addition, a search of the LDS website has numerous links--although it could be argued that it is from a church point of view only.

My personal opinion is that there are plenty of people in this world who do not know the roots of their faith--no matter what faith they follow.

A new book on the subject is coming out in December.
Innocent Blood: A Documentary History of the Mountain Meadows Massacre (Kingdom in the West) by David L. Bigler and Will Bagley
July 13, 2008 at 2:47 PM

Bombillo said…
I find it personally unacceptable for Mormon scholars to be the authors of this book. As prejudicial as this may seem, it is not intellectually honest to ask "true believers" to be accurate in their findings if there is anything "uncomfortable" discovered.

Faithful LDS members passing judgment on the culpability of their "Profit" is simply too much of a conflict. Non Church affiliated researchers must be given full access to the source documents and then let the chips fall where they might.
September 12, 2009 at 4:00 AM