Jacob on the Golf Course 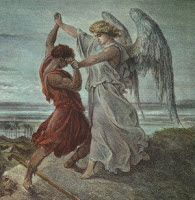 Art Remillard
Every now and again, I see a modern rendering of Jacob's dramatic wrestling match with an angel (or God, or Esau, or his "dark twin"...you pick). Consider, for example, a recent professional golf tournament. Playing on a ruptured ACL and two stress fractures in his leg, Tiger Woods endured 5 days and 91 holes of U.S. Open competition before claiming victory. Afterward, we learned of his injuries and that Woods will be unable to compete for the rest of the season because of them. Fans and journalists remain astonished, and the golfer has become the object of pious adoration. “The simple fact,” gushed one sportswriter, “is there are no words to explain satisfactorily what we saw . . . ; no ordinary measure of achievement by which to judge Tiger's [success]; and no way of really knowing just how much mental and physical agony he went through.”
Like Jacob, Woods struggled through a laborious competition despite a painful leg injury. But I saw the shadow of Jacob fall more directly over Woods’s unlikely challenger, Rocco Mediate, who one golf analyst remarked, “looks like the guy who cleans Tiger's swimming pool.” (Classy, eh?). By most standards, Mediate is an average professional golfer. He’s 45 years old, at the end of his career, has few wins to his credit, and suffers from a bad back. Nevertheless, Mediate nearly won. During the tournament, fans slowly grew enchanted with the unassuming golfer. And since his loss, Mediate's endeavor has reached legendary status. One sportswriter called him “the every man’s hero,” and another concluded, “Tiger may have won, but Mediate showed more control, character and guts than any Woods challenger in memory.”

Mediate did not win in the traditional sense, but neither did Jacob. This suggests that a noble loss can be just as compelling as a thrilling victory. Why? “People talk about looking for the meaning of life,” Joseph Campbell once remarked, “what you’re really looking for is an experience of life. And one of the experiences is a good fight.” What a sporting event can do, he continued, is showcase a “good fight,” contain the violence, and give people an exhilarating experience of life. No doubt, Mediate’s heroic accomplishment wasn’t defeating the giant, but rather standing up to him and fighting the good fight.

Mike Pasquier said…
Art: I really like the way you've set this case of Woods and Mediate in terms of the "good fight." As a runner, I don't know how many times I've seen the backs of t-shirts with the verse from Hebrews 12: "Let us run with perseverance the race marked out for us." Perhaps in addition to the "good fight" theme, we might add the "good race" theme as well.

It's interesting how scriptural references and motifs creep into the way popular media conceive of sports. Maybe it's just the way we tell stories in Western societies.

I leave this conversation open especially to Art, the resident running expert of the blog, and Phil, the resident golf expert, and any other wannabes like me out there.
June 25, 2008 at 11:26 AM

Randall said…
I have long tried to be an orthodriver, but, sadly, I'm an irredeemable heterodriver. I see now that I'm wearing the wrong apparel. Witness gear is where it's at. Mad props to those who don "Tommy Hellfighter" and "This Blood's for You" Ts.
June 25, 2008 at 5:05 PM

Phil said…
Nice post, Art. I've long contemplated some kind of project on golf and religion; many times I've heard golfers discuss their "devotion" to the sport and its "redemptive"/theological aspects such as sanctification and humility. My golf coach in college was quite vocal about his Protesant Reformed faith, for example, and often spoke using such terms. At any rate, I find your description of the U.S. Open in religious categories really interesting.

I'm not sure what being a resident golf expert means for an academic blog, but thanks for the compliment, Mike. :) Although I have managed to still shoot around par, I only play 5-6 times a year, and so am "semi-retired" from the sport. I've actually taken to running, apparently another "spiritual sport."

And Mike, don't sell yourself short with all of those marathons under your belt! And although I don't know if he runs marathons, I've also been witness to Ed Blum pounding the pavement too!
June 25, 2008 at 10:18 PM

Art Remillard said…
I had to google "witness gear," but still am pondering "orthodriver." And I thought working the word "monocle" into a post was creative!

Indeed Phil, I agree that Mike ought not sell himself short. He's clearly the "Marathon Man of American Religious History." I believe it was Fall '06 when he ran two marathons and a 50k. I bow in deference.

Anyway, as I've said before, I think you're on to something with religion and golf. You no doubt caught Bill Baker's reference in _Playing with God_ to Rev. S.D. McConnell's "The Moral Side of Golf" (1900), which favored Sunday play so long as the golfer went to church first. Doing so, he supposed, would steady the golfer and offer "fuller satisfaction in his game."

DEG said…
Personally, I've experienced more of the profane than the sacred on the course. Routinely hooking 75-yard wedges into greenside-bunkers on par 5's isn't good for the soul.
June 26, 2008 at 7:07 AM

Mike Pasquier said…
Good point about the profanity of sport. Any Hashers out there? Wondering what a hasher is?