Now that teaching's done, I've been able to get to my summer reading stack (and put the hurt on some dissertation chapters). First on my list was James M. O'Toole's The Faithful: A History of Catholics in America, recently published by Harvard UP. 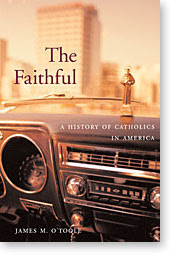 I've been needing to brush up on my Catholic history, and this is an effective synthesis, telling the "bottom-up" story of American Catholicism from the perspective of lay Catholics. O'Toole's treatment is nicely divided into six "ages" - "The Priestless Church," "The Church in a Democratic Republic," "The Immigrant Church," "The Church of Catholic Action," "The Church of Vatican II," and "The Church in the Twenty-First Century" - that non-specialists and, especially, students, will find a helpful conceptual model for comprehending American Catholic history. To be sure, I doubt that Catholic historians will find many startling arguments in here, but I've found his narrative eye-opening, particularly his chapters on Catholicism in the the colonial era and early republic, and his treatment of the pope's relationship to the American "faithful" (as lay Catholics preferred to describe themselves). The implications of his book, as O'Toole sees them, are pressing since "A new age of the church in America has begun, and what form that church will take, what combination of old and new, will be up to its people to decide." One of the faithful himself, O'Toole wonders aloud: "What will be our collective national culture and ethos? How shall we behave toward each other, and especially toward the more unfortunate among us? What kind of discourse will we have with one another about what really matters to us as individuals and as a nation?" Most of those questions, O'Toole points out, are old ones, but also questions that Catholics share with most Americans. As such, his history is not just a religious history or a denominational history, but a readable, pertinent, and timely national history.
Email Post
Labels: catholicism deg's posts lived religion religion and civic life teaching resources

Art Remillard said…
Thanks Darren. I'm assuming that you would recommend it for a undergrad course on the topic. I need to put together a syllabus on the topic, so I'll need to get a copy...
May 25, 2008 at 12:45 PM

DEG said…
Definitely, especially for a course on Amer. Catholicism. For an Amer. religious history survey, maybe selections from it would suffice.
May 25, 2008 at 2:33 PM