Recently a student came to my office hours, asking about the upcoming exam. The class, “Nicole, Monica, and Katrina: An Introduction to American Studies” uses the murder of Nicole Brown Simpson, the Monica Lewinsky sex scandal, and Hurricane Katrina as documents in a study of U.S. spectacle. Most of the class is spent making a mess of things: elaborating the disastrous aftereffects of an unnatural disaster, examining the labyrinthine illogic of the Starr Report, and enumerating the compromised evidence and conflicting argumentation of bedlam.

The student asked a couple ferreting inquiries about test topics, then laid in for the real. “So, I don’t really need to talk about the exam,” he said, “What I really want to know is, what do you think about all this?” He told me that he hated how professors don’t give their opinions, how it’s all messiness and purported objectivity. As I write this, it sounds a little tough on the guy, and I don’t mean to be. He was sweet, if a little digging. What did I believe, anyway? And why wasn’t I telling them? Did O.J. slaughter his ex on one hot night? Was Monica to blame for all that brouhaha? And did I despise Michael Chertoff?

I thought about that student, and that inquiry, as I read the latest CNN contribution to the FLDS exile: “Psychiatrist: Disobedience Equals Damnation In Sect.” Inside, we learn that the aforementioned psychiatrist is “Bruce Perry” a man who “has worked with families involved with groups such as the Branch Davidian sect in , as well as some smaller groups.” His role in this case is testimonial, helping to determine who gets custody of the over 400 children removed from the ranch. Among his sterling insights is this delightful self-revelation: “While 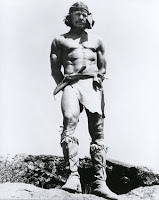 Perry said he considered the FLDS a separatist group, he acknowledged doing little reading on their doctrine and said he has not spoken to its leaders.”

I don’t know what to say about Perry. (That’s not exactly true. I do have many things to say about and to Perry, but for now I’ll merely offer that association with the Branch Davidian situation strikes me as a rather Arthur Andersen sort of reference.) I don’t know, yet, what one should or could say about these women and children. It is a very real debacle: mysterious phone calls, eerie images, painful patriarchy, and assumptive oppression. The stuff seeking Charles Bronson circa 1974 stepping in, coolly, to rescue the dark-haired dames and their precious, innocent children. But this isn’t film and it isn’t yet clear that any heroism might be culled from this sprawling compound of a mess.

Religious studies offers only more clutter to the cause, endorsing insider compassion and explanation, as well as outsider adherence to the criminal code and civil expectations of a society adjudicated by taxes and judicial determination. These two strategies (explication and 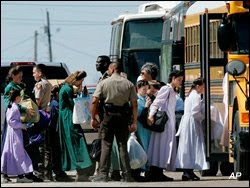 adherence, examination and classification) are not always collaborative or constructive for the given political moment. But it is constructive for the intellectual moment. One of the admirable things about this enterprise, religious studies, is that it isn’t just one thing or another, it isn’t just exoneration or condemnation. It is the wobbling space between understanding and conversion, the space best described (today, by these semester-weary hands) as compassionate critique. It’s too early, way too early, to offer any one opinion on this multiple set of matters. So we watch and see, hoping that the fate of these women, these human beings, does not rest in Bruce Perry’s hands.

Anonymous said…
I don't know anything about the issue, but the prose in that blog entry is better than many books I read!
April 18, 2008 at 5:38 PM

Anonymous said…
Thank you Kathryn. It seems that, at least to this point, Bruce Perry has been determining the children's fate.
April 19, 2008 at 11:22 AM

rjc said…
Thanks for this, Katie. I think you strike just the right pose, and you represent the perspective of religious studies towards such things nicely. Too bad it doesn't satisfy everyone, but I'm convinced it's the only appropriate stance to take.
April 25, 2008 at 9:21 AM