Things are winding down in our “uncoverage” study of American religious history. Breaking into the late twentieth century this week, we studied the religious underpinnings of political activism, focusing on the civil rights movement and women’s movement. Another selection – Freedom Faith – from the PBS documentary This Far By Faith started us off. I wanted students to consider more than just the notable leaders of the civil rights movement, so they took notes on how this film portrayed the religious 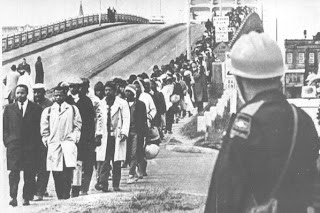 activism of African-Americans in the rural and small town South of the 1960s. By giving them some leading questions to guide their note taking, I tried to tie this film back to what we had studied previously about African-American religions and politics, as well as more theoretical concepts like the “religion of the American Way of Life” and “civil religion.” They were more successful at the former analysis than the latter, sometimes skipping completely over questions about how these activists both criticized and utilized notions of “religious freedom,” “religious individualism,” and “civil religion.” Only a few students caught on to these more conceptual connections, and this problem continued as they analyzed documents from the civil rights movement and women’s movement. Utilizing selections from King’s “Letter from a Birmingham Jail,” Malcolm X’s “Letters from Abroad,” and Mary F. Daly’s Beyond God the Father, I wanted them to consider the overlap between notions of “religious freedom” and “religious liberation.” How are the two connected? How might the former notion, however defined in various religions, inform similar or different interpretations of the latter notion? Oddly, our discussion of these matters was decidedly unsatisfactory, at least from my seat. 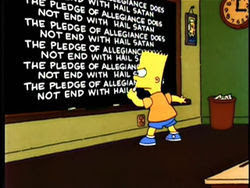 Even though I graphed out some of their ideas on the board, this didn’t enliven our discussion much in either the morning or afternoon class. When thinking back, I believe I was asking the wrong questions – or too vaguely put questions – to elicit responses that helped them understand - or debate - the nuances of the material better. But I think their difficulty with this section was also symptomatic of another issue I’ve been having recently with certain aspects of this course’s “uncoverage” design.

Most history classes flow from lectures into discussions. “Uncoverage” works in the reverse, starting with discussions of “raw” history and then following with a concluding lecture. Although I think this reorganization is great for jolting students out of their comfort zone early in the term, I’ve increasingly come to believe that it grants diminishing returns later in the term. Students need scaffolding, and, frankly, nothing like straight-up lecturing grants that. That’s not to say that I’m going to return to a lecture-driven pedagogy for smaller classes like this one; rather, I want to reintroduce lectures at the beginning of specific sections of the class, particularly ones where I think the broad historical context is a necessary foundation for understanding a given set of documents, a film, etc.

There’s a number of other edits that I want to make to the course, but I’ll relate those later, after I get back the end-term course evaluations. We’re moving through our last section of the course – Religion in “Culture War” America – this week, and will finish things off with their writing portfolios and final assignment in the next. Until then…
Email Post
Labels: catholicism deg's posts religion and civil rights religion and film/television teaching philosophy teaching resources

Art Remillard said…
Great analysis and coverage of uncoverage throughout this term. I enjoyed reading each one, getting (stealing) ideas along the way.

Forgive me if you've already noted this (remember my halfzeimers) , but how would you rate your effort put forth in this course? In other words, was it time intensive on your part, the same, less? I hope this question doesn't sound like my teaching priorities are misplaced ("'Uncoverage' sounds like a great idea if it means less work for me--both otherwise..."). I'm just curious after having done similar things, having similar results, and making similar revisions...
April 25, 2008 at 3:53 AM

DEG said…
Great question, and a necessary one. There was a lot of work up front to find appropriate documents and A/V selections for them to study. The syllabus also took a while to write because it was a completely new draft. I probably spent about two weeks of all-day work on both of those tasks. With the real "meat" of the course, however, I would say that prepping this course was about the same as a lecture-driven course (like my post-1865 survey). Planning discussions didn't take long at all and planning A/V days and anaylses were a snap once I'd decided on the films/slideshows I wanted to use. Lectures took about the same amount of time to plan as well (2-3 hours per lecture, mostly because I accompany mine with slideshows). There was only about a dozen lectures, so that wasn't too demanding. Quizzes took about 30-45 minutes each, but I cut down on my work load there by letting the textbook lead the way with questions (some were just verbatim statements out of the text, reframed into appropriate questions).

Concerning grading, I don't think more time with my red pens. Grading time, however, more spread out than usual. In my lecture-driven courses, grading comes in spurts, every few weeks or so. With this course, I was grading something almost every day, usually taking out an hour to hour and a half out of my day/evening. Honestly, I do most of my grading early in the morning when I get to the office and later in the evening after my son's in bed (when the Braves are on after April!), so it didn't affect my work-a-day schedule of dissertation research/writing too much.

I think, overall, there wasn't any more work involved in designing this class vs. designing a lecture-driven class (maybe less since I didn't have to write as many lectures). But the work was more spread out and frequent than mashed together and episodic. So, it depends on which work schedule you prefer, I suppose, as to whether you'll find it a more pleasurable and fitting design. Personally, I like doing a little work related to teaching each day instead of a lot every few weeks, but that's just me.
April 25, 2008 at 8:06 AM

I want to make a point that moves away from workload (a completely valid concern).

So the required reading didn't produce the desired scaffolding effect? If not, then perhaps it is valid to question whether lecturing will do any better. If you lecture, they lose the before/out-of-class time needed for processing and reflection before you ask questions. Otherwise you're only rewarding/aiding those in class who're already able---those who think on their feet.

The deepest issue here, I believe, is uncertainty and risk. There are risks to both increasing lecturing and maintaining greater in-class time for discussion. By choosing to lecture more (at the beginning versus just the end of class), you're simply increasing the risk that they won't do the assigned reading.

My overall point is that, with either lecture or uncoverage, there is a point of diminishing returns (sort of like a "natural rate of unemployment). Neither provokes the amount of thinking and discussion that ~we~ want (i.e. high level).

Anyway, great series of posts! As art noted, they've been thought provoking. Disclosure: I tend toward the discussion side, so I defend errors in that direction.

DEG said…
If I'm reading you correctly, you're wondering about my experience this term, right? Frankly, I don't think they got much scaffolding for understanding the docs they read, primarily because they read the textbook after reading the docs. I also lectured on the day their textbook readings were due. Next time around, I'm thinking about lecturing up front on a more focused issue than the textbook describes. That way they get the right scaffolding, but can't use the lectures as a substitute for the readings. Then, hopefully, they'll be better prepped for understanding how the documents supplement the major issues that my lectures and their textbook readings raise. To police some of this, I'm also thinking about introducing bi/tri-weekly mini-exams to make sure they're paying attention to both my lectures AND the readings. Sure, it's a reversion to test dependence that I'm a tad wary of, but I need to make sure they're synthesizing the material somehow. My experience with the book quizzes and essays this term was that, well, they weren't.

You're so right about uncertainty, risk, and diminishing returns. I guess I've become more comfortable with the risk that they're not doing the textbook readings and more concerned with the risk that they aren't connecting the documents we analyze to the broader stories of American religious history. If I can get them to think on that level, then I'll be (more) satisfied.
April 25, 2008 at 2:21 PM