"But the Holy Father Is Coming"

Yesterday, a student asked me if she could be excused from class next week.  “But we’re going to review for the final exam,” I replied.  “But the Holy Father is coming,” she responded.  I have to admit I didn’t see that one coming.  However, I’m reminded by my devout student that the visit of Pope Benedict XVI to the United States is a pretty big deal for many American Catholics.  It’s also an interesting moment for us religious studies types to observe the carefully choreographed collision of American culture and Roman Catholicism in the twenty-first century. 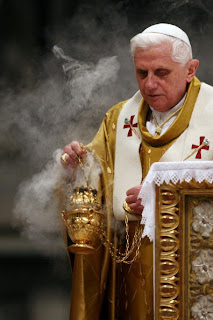 Here’s a quick tip sheet for things to look out for.

1. Immigration—In his “Video Message to the United States,” the pope spoke in both English and Spanish.  Today, almost 40 percent of the U.S. Catholic population is Hispanic.  You can read an interview with U.S. Ambassador Francis Rooney to the Holy See for some insight into the discussion over the issue of immigration, as well topics such as aid to Africa and the war in Iraq.

2. War and Peace—The pope will be meeting President Bush and other world leaders at the United Nations.  He will also be praying at Ground Zero in New York.  For some perspective on the Vatican’s responses to recent global conflicts, see Michael Sean Winters’ Washington Post editorial, “Wholly Different Angles on the World.”

3. Interreligious Dialogue—In addition to his controversial Regensburg lecture in 2006 and baptism of a prominent (ex)Muslim in 2008, the pope has also organized an interreligious dialogue between Catholics and Muslims to begin this November.  Francis X. Clooney, Parkman Professor of Divinity and Professor of Comparative Theology at Harvard, reflected upon the pope’s dialogical tactics in a Commonweal piece, “Learning to Listen: Benedict XVI and Interreligious Dialogue.” 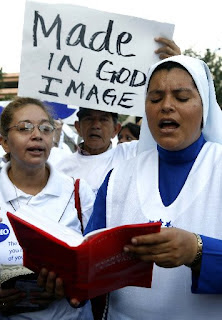 4. American Political Ideology—Many scholars (some more qualified than others, including myself) have commented upon the changing political face of Catholicism in the United States.  In my opinion, John McGreevy’s article in the American Quarterly on “Catholics, Democrats, and the GOP in Contemporary America” is by far the most careful examination of the current religious/political landscape.  But, if you want to get a first-hand account of what McGreevy is saying about the recent coalition of neoconservatives and some American Catholics, look no further than First Things, the publication of Fr. Richard John Neuhaus’s Institute on Religion and Public Life, which describes itself as “an interreligious, nonpartisan research and education institute whose purpose is to advance a religiously informed public philosophy for the ordering of society.”  Read Neuhaus’s instructions on how to listen to Benedict.  Or watch him cover the pope’s visit on EWTN (Eternal Word Television Network).

I’m always fascinated by the scholarly and popular coverage of a papal visit.  From Samuel Morse’s conspiratorial diatribes against popery in the nineteenth century to Wolf Blitzer’s complementary commentary on the death of a Polish pope in the twenty-first century, it’s difficult to count the many ways in which people have represented popes and their messages.  There will be many people claiming to know what this visit means for the present and future state of the Roman Catholic Church around the world and in the United States.  I find myself enjoying the noise and confusion and debate and pontification (get it?).  And there’s usually a moment—a particularly poignant voice that silences the cacophony or an insidious gaff that creates an even louder disruption—when I’m reminded that all of this commotion matters.  But for the life of me, I don’t know how to make sense of it.

Art Remillard said…
Great stuff, as always... I'll add two more items to your list. 1) American Catholic colleges and universities. Will he scold, taking the presidents to the woodshed? Or will he re-state Ex Corde Ecclesiae calmly and leave it at that? 2) The sex abuse scandals. Will this be a full apology tour, with a plea to heal and forgive? Or will the issue be given perfunctory attention?
April 12, 2008 at 10:02 AM

Mike Pasquier said…
Two great additions, Art. I'm under the impression that Benedict is going to do his very best NOT to stray away from his message, "Christ our hope." Which means that he's probably not going to directly engage many of the issues we've listed, or at least not in any controversial way. But let's hope I'm wrong.
April 13, 2008 at 6:23 AM