Alan Wolfe's essay in the Atlantic Monthly, "The Coming Religious Peace" (March 2008), is a fascinating read. (See also, Jane Clayson's discussion with Wolfe on WBUR's On Point.) Amid the hubub about devotion and doubt, Wolfe uses a recent Pew survey to chart some trends in world religion. I had thought that the secularization thesis was dead, buried, and long decomposed by now, but the Pew survey and Wolfe's take on it shed new light on old questions.

Wolfe's remarks on the future of belief:

A lot rides on which of these predictions turn out to be true, and on how and where different religions bump up against one another. A common worry is that intense competition for souls could produce another era in which religious conflict leads to religious war—only this time 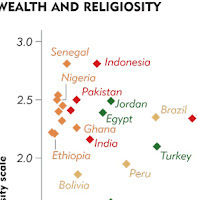 with nuclear weapons. If we are really in for anything like the kind of zeal that accompanied earlier periods of religious expansion, we might as well say goodbye to the Enlightenment and its principles of tolerance.

The Pew chart that matches a "religiosity scale" and "per capita GDP," gives new meaning to the shop worn concept of "American exceptionalism."

Sure, Pentecostalism, Islam, and Mormonism are on the rise, but Wolfe cautions, don't count out the growing tide of secularism.

. . . the idea of inevitable secularization has fallen out of favor with many scholars and journalists. Still, its most basic tenet—that material progress will slowly erode religious fervor—appears unassailable. Last October, the Pew Global Attitudes Project plotted 44 countries according to per capita gross domestic product and intensity of religious belief, gauged by the responses to several questions about faith (a rendition of the Pew data appears on the opposite page). The pattern, as seen in the Pew study and a number of other sources, is hard to miss: when God and Mammon collide, Mammon usually wins.
Email Post
Labels: randall's posts religion and class religion and economics religion in the press secularization

Scooper said…
Wolfe mentions in passing that the US is more of a free market for religion than Europe, but he doesn't mention how Europe's religious market works. In European churches, you generally don't pass the collection plate. The Government does it for you. That is, if you are a Lutheran, for example, you register as one, and the Government collects a special tax from you which it delivers to the Lutheran Church. So, if you want to reduce your taxes, you simply decline to state your faith affiliation. It's a classic example of getting less of something by taxing it.
February 19, 2008 at 10:49 PM