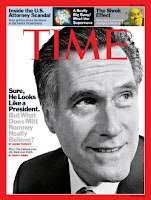 Some days it feels like all I do is monitor Mormons. I thought for sure I’d stay on the fray with this one, leaving to smarter, more expert voices the daily LDS crime watch. But then Frank Rich had to make the compare and contrast maneuver, blessing Mademoiselle Oprah while mocking Mormon Mitt, and it was over: them was fighting words. It was perhaps unsurprising (for us, historians of religion) that Rich found a way to condemn Mormons as racist and applaud Oprah Winfrey as beneficent in the same column; the religiously observant have always been the source for uninformed censure. Likewise, African American entertainers have long enjoyed condescending white applause. Now, Romney and Winfrey had something in common: the prejudicial presumptions of their cultured despisers.

With this silly mid-December rant, Rich ripped me into action. Hours lost checking blogs for easy bigotry and tracking presidential candidates’ adjectival inferences about marriage and family. Someone (somewhere) is wounding a religious subject, and now we (students of religion, custodians of sectarian self-esteem) are superheroes to the cause, using pluralist slogans and large explanatory reference works (rather than invisibility or shifts in the space-time continuum) to protect Gotham from prejudicial talk.

We’ve made some friends along the way. Noah Feldman showed up with a lovely, if somewhat derivative, defense of religious freedom. The New Yorker, too, has patronized (patronizingly) the LDS back story, paralleling it in other issues with the and the ironic development of megachurches. Sunday magazines and weekly cultural reporters alike have tuned in to watch, raptly, devotions done for the divine in this, our bright new . Key tonal and topical shifts in such articles include the pursuit of the ironic contrast (they claim to love family but look at those divorcing Osmonds!), ironic invocation of capital (does God really want them to own hotel chains?), and the suspicious (paranoid, really) stare at familial portraits (how can anyone look that good all the time?). Sure, counterfeits and confidence men define the American experience, but c’mon: take a break. Just let the brothers (and sisters) believe.

But how can we, when they’re always up to hilarious self-contradiction? Gawker (evil beast) turned me to yet another anthropological tour of Mormonia. This time, the Mormons take . Or, as the wily minds at the New York Observer put it: “Mormons of Manhattan!” (As a sidebar, I’ll just say: I’ve missed the headlining exclamation point. Glad to know that punctuation, once saved for murderous scandal and the sinking , has returned in service of urban legends like, you know, Christians in .)

The article, posing as ethnographic report, is so deliciously self-satisfied that it should become required reading for classes on nativism (classes on anything, really: critical thinking never had such easy mush). This is how hate sneaks in: under the guise of charmed observance. See the young Mormon lass (Nobu waitress and stand-up comic) talk marriage to the unmarried, wear vintage over secret undergarments, trade Converse kicks for suede pumps! See the young Mormon lass talk loneliness and her Harvard education over fries and a (let us hope decaffeinated) diet Coke! See young Mormons seek other young Mormon singles! See young Mormons buy a pre-war classic six! See them never drink! Organize effectively! And taste the pleasures of our pleasure-soaked city without once (never once) breaking monetary stride. “If there’s one theme you hear over and over again from young Mormons, it’s that the Word of Wisdom ultimately gives them a leg up in the ultra-competitive business world—they’re never hung over, after all, and they never have to worry about STDs or being pregnant or blacking out and knocking their teeth out.” (As another sidebar, may I just beg young non-Mormon to be wary of dental damage? Fun isn’t really fun that necessitates Novacaine.)

Finally (as climax) the article ends with a teaser quote, taking a turn every young bigot needs to make the cause go from potential to real. I speak, of course, of sexing the subject. “Then again, dating non-Mormons isn’t easy either, Ms. Baker said. ‘I’m a decently attractive girl, and guys immediately go to—well, they see it click in their head: Oh, my God, I’m talking to a virgin'.” All across the isle that morning, young boys (some young lasses) found a new fantasy, one to replace (temporarily, till someone else so tantalizes with their sultry oppression) faded pin-ups of Maria Monk and Sally Hemings. “Mormons Take !” and our hearts, too. I just need to find my cape.

Here's a (long) link to an 1858 version of the fantasy, complete with emasculated Mormon men not measuring up: