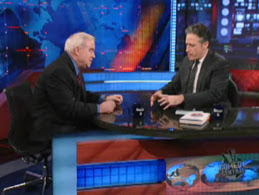 The Great Awakening. He emphasized the role of social ethics in forming a new moral consensus. "God's Politics called on people to take back their faith after it had been 'hijacked' by the Religious Right" writes Wallis. "Millions of Christ­ians have done just that, and now the question is what are we going to do with our faith, now that we have it back? My new book, The Great Awakening: Reviving Faith and Politics in a Post-Religious Right America, addresses that question."

The bubbling up of a new Christian politics is not just the wishful thinking of a few blue-state evangelicals. It's evident in the emerging church movement, the recent pronouncements of Rick Warren, and in publications geared toward born again twenty somethings like Relevant Magazine. The politics of personal and sexual morality are not exciting the masses like they used to.

Stewart questioned Wallis on the prospects of the "religious Left." There may be some who fear that a hegemonic religious Left will be as off-putting as the much pilloried Christian Right is now. (This is a point that historian Stephen Prothero has recently made.) With so much attention being paid to the evangelical crackup, the future of evangelicalism, Left and Right, seems surprisingly uncertain.
Email Post
Labels: evangelical center/left randall's posts religion and politics religious biography