Doc Watch and Secularism in America

I've gotta confess. I'm a documentary junky. Youtube's staple of obscure clips and Netflix's ever-expanding catalog have only fed my habit. (I enjoyed reading about the Jewish Americans doc here on the blog and caught most of one episode last week.)

Two films recently came to my attention. Though, I have seen neither of them. The first was a big hit at the 2007 Sundance Festival. The second should be in theaters this spring.

For the Bible Tells Me So:

Winner of the Audience Award for Best Documentary at the Seattle International Film Festival, Dan Karslake's provocative, entertaining documentary brilliantly reconciles homosexuality and Biblical scripture, and in the process reveals that Church-sanctioned anti-gay bias is based almost solely upon a significant (and often malicious) misinterpretation of the Bible.

Praying With My Legs The Radically Amazing Life and Legacy of Abraham Joshua Heschel:

Filmmaker Steven Brand and Rabbi David Lieber, President Emeritus of the University of Judaism, will view 30 minutes of the proposed 90-minute documentary. “Praying With My legs” is about the life, times, and teachings of Abraham Joshua 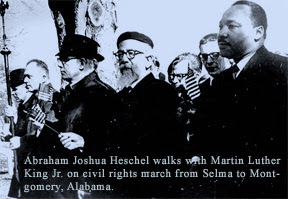 Heschel, who counted the UJ’s esteemed Dr. Lieber among his students.

(Several weeks ago Paul wrote an entry on Heschel here.)

Another fairly recent item of interest: Wilfred McClay's Pew-sponsored lecture in December 2007 on religion and secularism:

Religion and Secularism: The American Experience:

Some of the nation's leading journalists gathered in Key West, Fla., in December 2007, for the Pew Forum's biannual conference on religion, politics and public life. Given the recent popularity of several high-profile books on atheism, the Pew Forum invited Wilfred McClay, a distinguished professor of intellectual history, to speak on the historical relationship between religion and secularism in America.
Email Post
Labels: american judaism atheism randall's posts religion and civil rights religion and film/television religion and sexuality

Anonymous said…
Thanks, Randall. I think both of those look fascinating. Not to downplay Heschel, who is a compelling figure, I'm very curious to watch the first.
January 17, 2008 at 4:41 PM