The Search for Solid Rock

Millennial thinking needs new tropes. At the very least, it needs new energy, since plots for endgame take an increasingly absurdist slant (or they star Will Smith, whose apocalypse seems inevitable the longer he stands so near to Tom Cruise). What with war, Hillary Clinton’s criticized tableau, and holiday merriment straight around the weekly corner, we have ample material to fuel fantasies of new tomorrow (prefaced by bleak todays, but no matter: the righteous will survive). 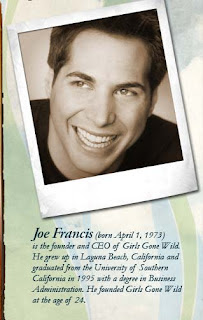 To wit: the quest to free Joe Francis. What might be said about a world (any world, really, but let’s stick to ours, geographic and political) that worries so about a man (any man, really, but let’s stick to this one, this prescient pornographer) accused of (for real) more than 70 counts, including racketeering, drug trafficking, prostitution and promoting the sexual performance of children. Who is Joe Francis, you might ask (if, say, you lean more towards piano parties and Lutheran bake sales than late night infomercials or the pleasures of South Padre Island)? Well, to answer this question, you should take a trip to his website, a rattan- and bamboo-inflected wander through the genius of Joe Francis, the 37-year-old founder of the Girls Gone Wild franchise.

At that website, and in a Sunday New York Times article, we learn about Joe’s current incarceration and lavish lifestyle. We learn, too, about the location of the “hottest girls” (“My experience has been that anytime you go south of the Mason Dixon line, the girls seem to get more attractive.”) and the sexual options of a Peeping entrepreneur (in short, quite a wide array). Most importantly, though, we learn that constitutional rights are being infringed: “Girls Gone Wild founder and CEO Joe Francis has been sitting in jail for eight months, not because he’s been convicted of a crime, but because he’s been denied his 8th Amendment Constitutional right to bail. It seems certain officials in a small town are intent on making some sort of example of him.”

Some sort of example, indeed. Exemplifying what? The details of the case are intricate and appealing, including as they do Larry Flynt self-analogies, lying teenage hotties, and tax evasion as the kicker. As is almost always the case in such sparkle-studded imprisonments, both sides have their fair share of idiocies and aggrandizements. Most critical, though, is Joe Francis himself, standing at the center, martyred to a democracy and an economy that gave him the opportunity to give to others so much (“Cassandra and Brittany know how to have a good time -- and all they need is each other!”) and all he wants to do is keep giving (“as you explore this site, I think you’ll come to find that my desires, dreams and disappointments aren’t terribly different from your own”). The problem is, of course, that government officials just can’t stand him (or for what he stands) and so they are violating his rights (and yours). 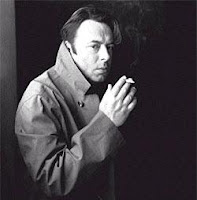 Constitutionality litters the airwaves this week. “What Article VI does not do, and was never intended to do, is deny me the right to say, as loudly as I may choose, that I will on no account vote for a smirking hick like Mike Huckabee,” explains Mr. Hitchens in another subtle rampage against religiosity. “Isn't it amazing how self-pitying and self-aggrandizing the religious freaks in this country are?” As posts on this blog have explored, and opinion pages nationwide have professed, this is a moment for religious inquiry to serve the spastic clatter of politics. Are we not, to some extent, called upon to respond, to leaven Hitchens’ monomaniacal bigotry and reflect upon Mr. Francis’ sacrificial sense of self? Some may say we should stay far from such talk; after all, to be an intellectual is to practice arts and methods too rigorous for punditry. Our footnotes will never make it, and so we will serve only the précis, not the proof. Yet. As we ponder Mitt’s Mormon mug and Hillary’s deepening lines, as we smirk at Jamie Lynn Spear’s baby bump and roll in our tinseled excess, a moment for messianism (or critical reflections on the need for messianism) wouldn’t be so outlandish. Because if Joe Francis is the only letter we’re getting from prison nowadays, then I think we have a real problem on our hands. never seemed so very far away.