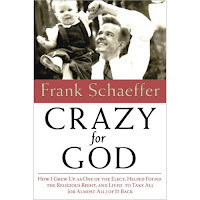 I just got done reading Frank Schaeffer’s memoir Crazy for God. (See Paul's comments on the book from Oct. 5). The subtitle of the book really tells it all: “How I Grew Up as One of the Elect, Helped Found the Religious Right, and Lived to Take All (Or Almost All) of it Back.” For those of you who have never heard of him, Frank Schaeffer (or “Franky” as he was known to many evangelicals in the 1970s and 1980s) is the only son of Francis Schaeffer, the late evangelical theologian, cultural critic, and founder of the Christian study center in Switzerland known as L’Abri.

Frank Schaeffer is angry, and his book is painful to read in places, but he writes so well that it was hard for me to put this book down once I started reading. A few brief thoughts:

First, many evangelicals will read this book as a sort of guilty pleasure. Frank knows things about Francis and Edith Schaeffer that the public does not. And he is willing to spill the proverbial beans. Others will read this book as yet another attack on the Religious Right—this time by a former insider. Here are just a few little tidbits likely to drive evangelicals crazy and bring a self-reverential smile to their critics: Francis had a propensity for throwing heavy objects at his wife when he got angry with her. Frank learned to smoke pot from the son of John Harold Ockenga, the pastor of Boston’s famous Park Street Church. Frank and Os Guinness (his first name is irritatingly misspelled “Oz” throughout the book) often plotted together over which of the female L’Abri visitors Frank would “have a go at.” Edith Schaeffer always accompanied Francis on speaking trips because he demanded daily sex.

To be fair, the Schaeffers also come across as compassionate people who shared little of the intolerance of today’s Religious Right. Once Francis shed his 1930s and 1940s fundamentalist baggage, L’Abri became a happening place and Schaeffer became an evangelical authority on popular culture. Timothy Leary spent time at L’Abri and Led Zeppelin guitarist Jimmy Page carried around a copy of Schaeffer’s Escape from Reason. (Barbara Bush—yes THAT Barbara Bush—also spent time at L’Abri). One of Frank’s goals in this book is to show how men like Falwell, Dobson, and Robertson used the Schaeffers to further their own political ends. He wants to make it clear that Francis would have rejected most everything about the Religious Right if he were alive today. I am not so sure.

Second, and here I am building off a suggestion offered recently by Russ Reeves over at Tolle Blogge, this book is a fascinating story about how the son of an evangelical is able to remake himself. There is a Franklinesque (as in Ben) quality to his story. After Frank Schaeffer left the evangelical fold he had to start over again from scratch. He was no longer wanted on the evangelical lecture circuit and he could no longer bring himself to write evangelical books for evangelical publishers, even though some of them were still beckoning him. Rather than taking evangelical money for speaking engagements or advanced contracts, he stole pork shops from the local grocery store in order to feed himself. (He later paid the store back). He directed four really bad feature films (including “Baby on Board” with Judge Reinhold and Carol Kane) and was completely broke before MacMillan Publishing agreed to publish his novel Portofino. He eventually began to refer to himself as “Frank,” converted to Orthodoxy, and started writing a series of novels and non-fiction books about the experiences of American soldiers in the wake of 9-11. (His son, a marine, did a tour of duty in Iraq). When I saw him a few years ago on C-Span hawking one of these military memoirs, it took me several minutes and a few trips to Google before I realized that this New York Times best-selling author was the same guy I knew from the evangelical world.

Finally, historians of American evangelicalism will find Schaeffer’s memoir useful. I would imagine that he is not the most reliable or objective source, but his suggestion that Francis Schaeffer and his ambitious pro-life son provided intellectual firepower to the nascent Religious Right is convincing. In fact, Frank Schaeffer uses his memoir as an act of repentance. He claims that it was he who pushed his father to jump on the anti-abortion bandwagon. (Francis was skeptical since abortion was a “Catholic issue”). As a result, he laments that he is partially to blame for the politicization of abortion by the Religious Right and indirectly responsible for the election of George W. Bush and the deaths of so many young men and women in Iraq. This may be pushing things a bit far, but the suggestion is an interesting one.

Jeff said…
Fascinating entry John. I like Francis Shaeffer generally and still do even after some of those little known tidbits in the beginning of your blog revealed by his son! Always interesting to get behind the scenes esp. on someone as interesting as Shaeffer. I especially like what Francis accomplished at L'abri. Amazing really - they really opened up their home to people the Shaeffers did in order to bring Jesus to them. That is certainly commendable and put into quick perspective in Michael Hamilton's article on the Shaeffers in CT when he says that they had students and people puking in their home and on drugs etc. - they took them as they came so to speak and didn't make the non-believer change first in order to access Christ! Amen.