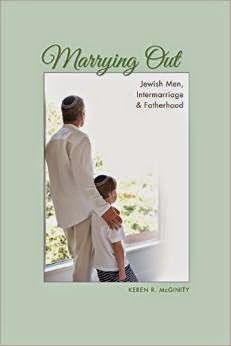 Marrying Out: Jewish Men, Intermarriage and Fatherhood, Keren McGinity’s second book on marriage between Jews and non-Jews, tackles the deeply underexplored topic of Jewish men in marriages to women who were not born Jewish. McGinity’s work seeks to explore the experiences of intermarried Jewish men, both as husbands and, more importantly, as fathers. To do so, she assembles a range of historical and cultural sources and conducts in-depth interviews with these couples and families. McGinity’s specific labeling of the women as “not born Jewish” is an important distinction.  It flags her consideration of couples who remained interfaith, as well as those in which the wife converted to Judaism before or during the marriage. She points out that if, for instance, a couple decides not to have Christmas in their home, the wife may deeply miss her own childhood traditions at that time of year, whether or not she has formally converted.  McGinity’s study analyzes both groups in order to claim that many of the dynamics of an interfaith marriage remain, regardless of conversion, across the spectrum of these families.  These issues include ambivalence about Christian traditions sacrificed in order to establish or maintain a Jewish home, as well as negotiation of the extended family. McGinity’s analysis foregrounds the interplay of gender, parenting, and religiosity, and provides often insightful observations about the potential for Jewish men to shape their children’s religious identities.  In doing so, she does not combat the sociological reality that women do the bulk of childrearing, including many Christian women raising Jewish children. She does, however, explore how men understand their own commitment to Judaism and how it does, and does not, translate into direct action.

Throughout the monograph, McGinity tests and ultimately refutes what she frames as many common stereotypes about intermarriage, including the widely-held perceptions that Jewish men marry Christians at a higher rate than Jewish women, that intermarriage leads to divorce, and the cultural trope that Jewish men are “lured” away by the increased sex appeal specifically of non-Jewish women Instead, she contrasts studies demonstrating equivalent rates of intermarriage with the overwhelming popular culture depictions of Jewish men and (blonde) Christian women and teases out statistics on intermarriage and divorce.

Most importantly, however, she explores the relationship of Jewish men to the topic of intermarriage and their own Jewish heritage. She points to sex and sexual attraction as far more important elements than Judaism in the dating patterns of Jewish men. Further, she argues that Jewish men often have a contentious relationship to communal Jewish life for two key reasons:  first, post-war Judaism has not adapted to the changing needs of American men, and second, Jewish men are more likely than women to break with organized Judaism over a single negative experience. She points to fatherhood, more than marriage, as a moment that heightens the importance of Jewish identity to intermarried men.  At the same time, her interviews with both intermarried men and women illustrate that the men continue to perform less than half of the labor involved in childrearing (including the fostering of Jewish identity) than do the children’s “not-born” Jewish mothers. Other interesting dimensions of McGinity’s work include treatments of intermarried Jewish men in popular culture and the impact of divorce on Jewish men’s responsibility for childrearing generally and the inculcation of Jewish identity in their children specifically. Significantly, her conclusion addresses the similarities and differences between the experiences of intermarried Jewish men and women, an important contribution on how gender shapes the Jewish experience of intermarriage.

McGinity draws her sample from those who entered interfaith marriages in the post-War years, focusing on two primary cohorts: those born between 1922 and 1945 and those born between 1946 and 1964, using similar dates for the women in her study. While delineating these cohorts demonstrates her attention to differences in their generational experiences, her actual analysis does not draw sharp distinctions between the two groups, nor does she adequately address the dramatically different historical contexts of the eras in which they married To that end, she at times situates the experiences of those who married in the early 1960s alongside those who married in the early 2000s. Because the landscape of marriage more broadly changed dramatically over those intervening decades, as did conversations about intermarriage, the lack of clear analytic demarcation can make it hard for the reader to plot the impact of key issues on her conclusions. For example, the rise of second-wave feminism, the increase of dual-career households, and the dramatic increase of intermarriage (and resulting shifts in communal responses to those changes) individually and collectively impact the ways in which these couples navigate their relationships, their families, and their perceived place within communal life. McGinity is aware of these cultural forces and notes them at various points in her analysis; however, the import and force of these significant changes are sometimes lost in an argument that does not overtly engage changes in Jewish articulations of identity, American gender dynamics, or changing rates of interfaith marriage over the course of the approximately fifty years of marriage she describes. Overall, however, McGinity’s characterization of Jewish men and their behavior provides a valuable intervention into an ongoing conversation in both Jewish Studies and Jewish communities about the formation of interfaith families, while also addressing the question of who bears the responsibility for nurturing Jewish identity within these family units.