Religion and the Founding, 2014 edition

Since it's the July 4th week-end, it seems an appropriate time to circle back to the on-going discussion about religion and the founding era. This year, let me direct your attention to a new collection of articles edited by Daniel Dreisbach and Mark D. Hall, Faith and the Founders of the American Republic. Released earlier this year, Dreisbach and Hall's volume definitely advances the conversation about religion and the founding through widening the scope of topics considered and acknowledging the complexity of the issue. 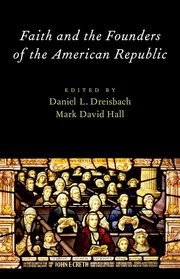 Faith and the Founders of the American Republic is actually the third work in what might be considered a trilogy of edited volumes from Dreisbach and Hall, beginning with  The Founders on God and Government (2004) and continuing with The Forgotten Founders on Religion and Public Life (2009), the previous two volumes co-edited with Jeffry Morrison.

In the introduction, the editors speak of their desire to "expand the conversation" about how to understand multiple religious beliefs acting in multiple ways during the founding era (6). On one hand, this means moving beyond the simple binaries of Christian orthodoxy/Deistic secularism that often get presented as the only options for understanding the founding. On the other, they strongly argue that religion for the founders cannot be understood simply through the lens of  "the Big 6": Washington, Adams, Jefferson, Madison, Hamilton, and Franklin. Rather, many other founders who also played important roles--and the groups in which they were enmeshed--need to be considered. To advance this two-fold strategy, the essays in the volume are divided in half, with the first eight essays examining how religion interacted in multiple ways with the political culture of the founding and with the last five examining other important founders whose religious commitments shed light on the complexity of religion in the founding.

(To understand more of the motivation behind the book, you may enjoy a podcast interview with Mark Hall, here).

The first section, on religion and political culture (broadly defined), uses many different lenses to address the question. I found lots of interesting perspectives in this section, and many of the works really interact well with other contemporary academic discussions.

The section starts off with a reflection from Darren Staloff on "Deism and the Founders." Staloff examines the canard that "the founders were Deists" and finds minimal support for that claim.  Deism, as defined in 18th-century European terms, was extremely limited, as even Jefferson and the later Franklin expressed belief in a divine, providential involvement in the world. Thus, rather than seeing the founding as either Enlightenment-based or solely religious, Staloff opts for an emphatic both (15). Staloff knows something about the Enlightenment, considering one of his recent works was on "The Politics of Enlightenment and the American Founding." I also thought Staloff's piece would pair well with Eric Schlereth's Age of Infidels.

Mark Hall offers a brief reading of Reformed Political Thought and its significance for the founding.  Hall has mined some of these connections previously--most recently in his very important study of Roger Sherman--but this essay could serve as a great primer for understanding the genealogy and components of Reformed Political Thought which was especially prominent in New England. This topic definitely deserves further consideration.


Daniel Dreisbach extends an invitation to understand how the founders read and used the Bible. He contends that the extensive biblical usage and knowledge of the founders needs to be taken seriously. More than just background, the presence of biblical language, used easily and often without citation, should be considered an important shaping factor for political thinking about the world and government. Dreisbach's piece called to mind James Byrd's Sacred Scripture, Sacred War (which I was also using this past week). With multiple works on the Bible in America life forthcoming from prominent scholars, along with an up-coming conference next month, Dreisbach's contribution is to remind us that the background language of Scripture was much more than just background.

Other essays examine intersections of other groups in the founding with religious concerns. David Dalin looks at how various founders interacted with both Jewish individuals and Jewish thought. Thomas Kidd returns to a topic he touched on formerly in American Christians and Islam to go back and look at "The Founders and Islam." Robert Calhoun and Ruma Chopra examine multiple ways Christianity functioned to support Loyalism and so could be read alongside Maya Jasanoff's Liberty's Exiles. Donald Drakeman reexamines the question of the Anti-Federalists and religion and interacts with both some original Anti-Federalists and some contemporary scholars to test how significant religion was in their opposition to the Constitution.

Readers of this blog might especially appreciate Jonathan Sassi's survey of how religion shaped the construction of race in the founding era. He deftly moves from the colonial inheritance through the founding period into the early republic to trace how religious debates helped or hindered Americans to construct not only citizenship but their understanding of whites, Indians, and African-Americans in the period.

In the second section, the volume turns to consider specific founders who demonstrated religious principles overlooked in the standard "Big 6" shorthand. Gregg Frazer examines Gouverneur Morris and how he exemplified a strand of thinking that Frazer has denominated "theistic rationalism." Gary Scott Smith encourages us to appreciate John Hancock, not only for his large signature on the Declaration of Independence, but for his Congregationalist commitments. Jane Calvert checks in from her important work on the misunderstood founder John Dickinson to remind us of the Quaker perspective he brought to the table. (If you haven't taken a look at her Quaker Constitutionalism book, you should!) Joe Coker examines the Baptists Isaac Backus and John Leland to show that these two Baptists, while supporting disestablishment, differed on what would follow.

Finally, I hope it's not out of line to point out that I have a chapter on Elias Boudinot of New Jersey. Boudinot served in several important roles, including President of Congress under the Confederation. I hold him up as a great example of Presbyterian concerns in the Revolution and early republic. As such, he was important in the Revolution for demonstrating the convergence of Reformed and republican thought. In the early republic, he served as a Federalist who sought to make the new nation a "righteous republic." As Federalists lost political strength, he redirected his energies into writing and voluntary reform, most particularly the formation of the American Bible Society, of which he was the first president. Thus I think the trajectory for understanding religion and the founding has to extend from the colonial period, through the Revolution and the drafting of the Constitution, and into the early republic to see how these themes bore fruit.

So, there may be some special pleading in my asserting this, but I believe this volume truly does merit real consideration. These authors are writing as serious scholars deeply desiring to understand the past properly. This is no polemic--indeed, the editors entirely bracket any contemporary reflections. Rather, by bringing in multiple voices, the editors have shown that religion in the founding period operated in multiple ways and interacted with Enlightened and secular political thought to create a distinctive American mix. And that's a topic worth reflecting on over the Independence Day Holiday.