Today I’m thrilled to share this guest post from Kyle Roberts, an Assistant Professor of Public History and New Media at Loyola University in Chicago. Kyle is a historian of evangelicalism in the early republic whose work focuses on the Atlantic world, the built environment, and print culture. His forthcoming Evangelical Gotham: Religion and the Making of New York City, 1783-1860, will rethink a lot of our assumptions about urban religions and his articles on the religious history of books have already garnered awards.  Before joining Loyola, Kyle worked for several years in Harvard’s Museum of Natural History and was a postdoctoral fellow at Queen Mary University London where he helped build a Virtual Library System of early Protestant library catalogs discussed below. In this post, Kyle writes his ongoing efforts to collapse the spaces between all of these fields in his ongoing Jesuit Libraries Project. For Chicagoland readers, the project also comes with an outstanding public seminar series, so take note. And as the conclusion suggests, this is hopefully the first of several posts from Kyle! 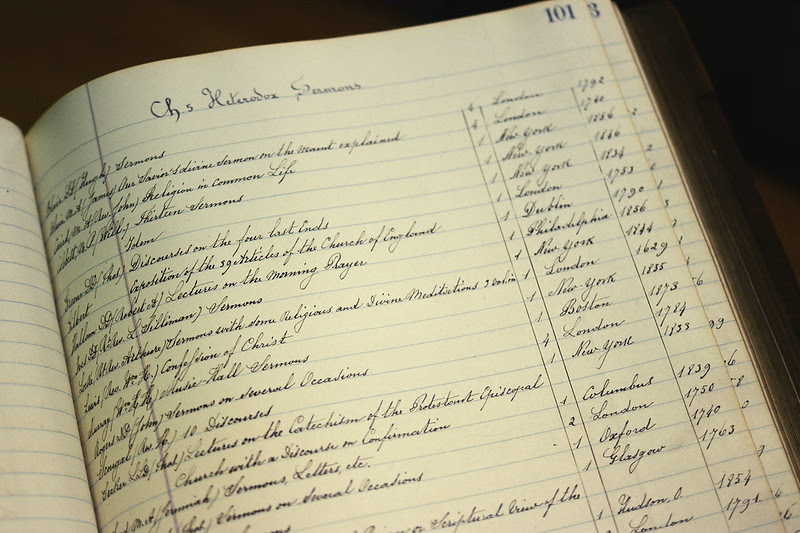 Sometime in the late 1870s, a librarian created a subject catalogue for the burgeoning library of St Ignatius College, the forerunner to Loyola University.  Founded at the beginning of that decade on unbroken prairie on the west side of Chicago, St Ignatius was part of an ambitious, coordinated movement by European-born Jesuits to found a network of Catholic colleges throughout the upper Midwest.  Prospectuses from the college’s early year tout the dramatic growth of the library’s collection, which numbered over ten thousand volumes by the end of the decade.  The rapid growth of the collection, in fact, likely necessitated the creation of the catalogue as a finding aid to the expansive collection.  The library catalogue’s arrangement in six divisions – pantology, theology, legislation, philosophy, literature, and history – reflected as much the layout of library shelves as it did the intellectual framework of Jesuit education.

Now, almost one hundred and forty years later, this manuscript catalogue is providing Loyola graduate students in Loyola’s Digital Humanities, History, and Public History programs a lens into some of the most important tensions within nineteenth-century urban Catholic identity.

University Archivist and Curator of Rare Books Kathy Young shared the manuscript catalogue with me my first week at Loyola.  I had recently arrived in Chicago following a two-year postdoc at Dr Williams’s Centre for Dissenting Studies, London, where I had helped create Dissenting Academies Online: Virtual Library System.  That database reconstructed the holdings and borrowing information for leading eighteenth- and nineteenth-century English Baptist, Congregational, and Presbyterian dissenting academies.  By bringing these neglected sources to light, we hoped to shed new light on the emergence of individual and collective dissenting identities and their impact on British society and culture.  Between the leather boards of the St Ignatius Library catalogue, I saw the opportunity to reveal through another innovative digital project the tensions between the Jesuits’ centuries-old tradition of the Ratio Studiorum and the demands of a professionalizing urban economy; between European-born and educated Jesuits and their American-born students, many the children of immigrants; between the desire for idealism and the necessity of pragmatism in a rapidly growing city; and between the analog and the digital in the work of historical inquiry. 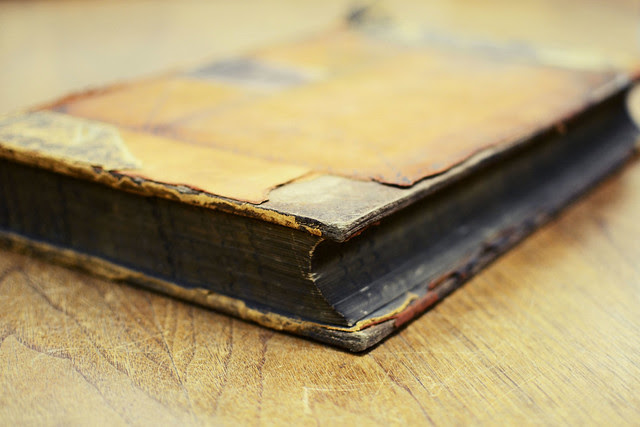 Realizing the power of digital platforms to unlock the secrets of complex analog sources, I immediately began to think of how I might use the manuscript catalogue as a focus for teaching American religious, public, and digital history.  I wanted my students to have first-hand experience of the process of building a collaborative digital humanities project.  Thus began the Jesuit Libraries Project. Undergraduate interns set to work photographing (and rephotograhing) the catalogue, transcribing its listings, and seeing if they could find original books in the modern library’s stacks.  I applied for a collaborative grant from Loyola’s Hank Center for the Catholic Intellectual Heritage. While the award from the Hank Center was a small faction of the funding Dissenting Academies Online received from the AHRC and the ESRC, it was enough to fund the labor and technical support costs. My colleagues in Loyola’s Center for Textual Studies and Digital Humanities saw value in my vision and enthusiastically agreed to support my efforts.  With these pieces in place, I was ready to design a graduate course that would turn an analog library catalogue into a powerful virtual library system.

As I sat down to create the syllabus for the course, I knew I needed to balance discussion of topics related to our subject matter – book history, Catholic history, urban history, educational history, public history, and digital history – with time for students to be trained in the necessary digital applications and to complete their digital work.  With a bumper crop of sixteen graduate students registered for the course, I was able to divide the 5200+ titles in the original catalogue into manageable segments of around 330 titles each.  I told students on the first day of class that I did not expect them to have any background in the segment on which they worked.  Practitioners in public history and the digital humanities know full well the reality of working on projects in which we need to quickly come up to speed on the subject matter at hand.

I ended up dividing the course into three units.  Over the first five weeks of the semester we will be reading and discussing a variety of contextual topics related to religious history, urban history, digital history, book history and bibliography. During this time, students are charged with using Loyola’s online library catalogue to see how many of the books they have been assigned survive in the library today.

I knew that during the middle five weeks of the course students would be working within the virtual library system tracking down MARC records for the books that have not survived.  This can be time-consuming work and I didn’t want to distract them from it.  So, I decided to use these middle weeks to host a seminar series where I invited leading scholars of Catholicism and print culture – Ellen Skerrett, Robert Orsi, Jim Connolly, Tom Tweed, and John McGreevy – to Loyola to share their work through a lecture or a pre-circulated paper.  To my delight, everyone I asked to participate was intrigued enough by the project to say yes!  The seminar series is open to the public, so anyone in the Chicago-area that would like to join us on Tuesday evenings at 6 pm in the Palm Court at Mundelein Hall, please do! The complete schedule is here.  Email me (kroberts2@luc.edu) if you would like to attend and I’ll send you the paper being discussed.

By the last four weeks of the class, students will have entered their books into the virtual library system and will focus on thinking about what their segments of the catalogue have to tell us about our topics of study.  2014 marks the bicentennial of the restoration of the Jesuits and Loyola is mounting a major summer exhibition – Crossings and Dwellings: Restored Jesuits, Women Religion, American Experience, 1814-2014 (19 July to 19 October 2014) - and an October 2014 conference to commemorate the event.  Each student will select one surviving book from her or his segment of the catalogue to have displayed in the exhibition, complete with her or his label text.  My hope is that students will continue to work on the topics that emerge from this class and present papers at the October 2014 conference.

Through the unusual lens of a library catalogue, I hope to foster a truly interdisciplinary exploration of nineteenth-century transnational book history, Catholic history, urban history, educational history, and digital history.  Stay tuned and in a few months I will share with you the fruits of our labors.
Email Post
Labels: chris cantwell's posts digital history digital humanities jesuit relations teaching

Unknown said…
A wonderful, ambitious framework for engaging your students in digital and archival work. Looking forward to finding out what their final book selections are, as well as how many of them go onto present next fall!
September 9, 2013 at 7:33 AM

Monica L. Mercado said…
Looking forward to the Palm Court seminars (fancy digs!) and future reflections on the project from Kyle. This is really exciting.
September 9, 2013 at 10:54 AM